Taking care of the environment is essential to preserve nature. That way, you can make sure the planet stays healthy in the future. However, many of the things we do every day can negatively affect the environment. One of those things is driving. Petrol-powered vehicles boost CO2 emissions.

Regardless of that, people can’t stop driving to save the planet. They still need to get to places, and walking takes a lot of time. Electric cars are a decent alternative to new cars that use a petrol engine. Vauxhall vehicles are an example of a company that wants to get more eco-friendly cars on the road.

Unfortunately, the process to make electric cars is difficult, so the time of electric vehicles is far from getting to us. That’s what makes e10 fuel a worthy alternative for eco-friendly drivers. E10 fuel aims to change the current petrol grades. However, this new fuel alternative has some pros and cons.

Dive into this page if you want to know more about the matter! Doing it can help you if e10 takes over fuel stations, and you need to face higher fuel costs.

E10 petrol is a new kind of eco-friendly fuel that aims to get us to a zero-emission future. This greener fuel is already the standard option in petrol stations of many countries.

What makes e10 petrol so good is its properties. Ethanol is an alcohol-based fuel produced from natural materials such as grains and sugarcane. You need ethanol to make a complete fuel. Other kinds of gas, such as E5, are made of it.

Environmental activists love e10 because it reduces emissions in every country and optimizes the renewable energy produced by cars. Unfortunately, there are some setbacks to using e10 petrol for your car; not all fuel lines are made for it, so older cars and some modern models are incompatible cars for this gas alternative.

The name e10 comes from ethanol fuel. E10 petrol is 10% made of ethanol, so it takes its name from that. Standard petrol doesn’t help you reduce greenhouse gas emissions, but it offers some benefits that e10 fuel doesn’t give you. Because of that, there is an active debate on which one people should use for their vehicles.

It depends on what your priorities are. As we mentioned before, super unleaded petrol and even regular petrol have some benefits that e10 doesn’t. This 10% fuel ethanol alternative is a less stable fuel than others made from pure gasoline. Yet, using renewable ethanol makes a biofuel that reduces carbon dioxide emissions.

Petrol cars are still better when talking about vehicle fuel economy. Even if regular petrol produces more carbon dioxide emissions, it is better for fuel tanks, and it can make you drive for more time than e10 fuel can. 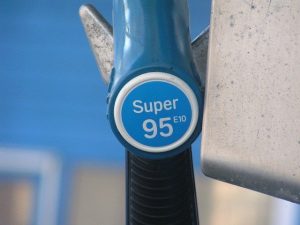 That makes people with older vehicles unable to use this fuel system. Using it for your fuel line, even if your car is not compatible with e10 can cause you some trouble. However, it’s not something that can destroy your car. Everything depends on how much fuel the car has.

Affected vehicles need to use standard unleaded fuel, though. If you want to know if your car can run on e10 fuel, contact car manufacturers. They can tell you if your vehicle is compatible with e10 and what you should do to prevent any issue from happening. Many organizations and agencies have stated their opinions on the matter.

Some of them show favorable benefits to using the e10 alternative. An example of that is the Biofuels Association reporting that using this fuel represents a slight reduction to emission targets in the UK. Additionally, this petrol alternative has increased its share of petrol sold since it was delivered to European countries.

The European Automobile Manufacturers Association said that smaller-engined cars are commonly capable of using this eco-friendly fuel. However, it also states that a petrol-engined car should use the correct fuel suitable for it instead of a super unleaded alternative.

France has met its emissions targets since e10 petrol is a fuel widely available in the country. The UK Transport Secretary Grant Shapps said that this greener fuel needs more development. However, he also says that using it can be essential for slashing emissions from UK’s roads.

Things to Consider About e10 Fuel

There are some things you should consider before deciding which fuel to use. Here are the most important ones:

Traditional fuel production is more optimized and compatibles with cars sold before 2002. Because of that, classic cars can use it with no problem. Unlike regular unleaded petrol, e10 petrol doesn’t allow you to cover a lot of distance per gallon.

This fuel alternative helps you reduce emissions from road transport. Even if you don’t care about that at the moment, that emissions reduction can bring a positive change to the environment in the long run.

As we mentioned before, your automobile may not be fit for this eco-friendly fuel if you have an older car. Using an incompatible car fueled with this petrol can damage the car’s engine. Can your car run with this fuel? You can know it by calling your vehicle manufacturer. However, cars built after 2010 should be able to use this fuel.

You may decide to use one fuel choice or another depending on your priorities. Yet, if you want to use e10 petrol for your automobile, make sure it is compatible with that fuel. Taking care of the environment is important. Because of that, many people are working to optimize this gas alternative for more cars.

Regardless of that, many environmental activists say that e10 petrol is an alternative that can help you reduce CO2 emissions until you can get an electric car, so you can also look forward to getting one.

If you had issues with e-10 call us