Here is a list of the wrong fuel questions we get asked – on or before nearly every job!

If you have any questions, or need a fuel drain now, please contact us.

Q; I drove my diesel car for 2 miles on petrol after I filled it up, then it just died on me. Will it need to be repaired ?
Answer; you didnt drive it for 2 miles on petrol whats more likely is you drove it for 2 miles with petrol in the tank.Once the petrol made its way through the low pressure sender pump, thru all the fuel lines, up to and through the filter (holds about a pint of fuel),  through the hoses to the high pressure pump, thru the pump, into the common rail resovoir, and finally into the high pressure lines into the combustion chamber, that’s normally the exact point that the engine stops turning, and in fact you will find you maybe got about 20 yards on petrol, which is the time it took for the engine to stall. The good news is, this isn’t as catastrophic as you might think and there is a simple, effective solution in a mobile fuel drain – a service we provide all over the country and we attend most call outs with 50 minutes, 24 hours a day. there are many different things that can happen with misfuelling, I have covered most of them below.
Q; What does petrol do to a diesel car's fuel system?
Answer: This  picture (below)  is the suction  line I use to remove wrong fuel . this was taken when doing a job that had 50 litres of petrol in a diesel mini, this was being taken from the fuel tank as the car had not been started. this hose is full of fuel, about 70% petrol, 30% diesel. 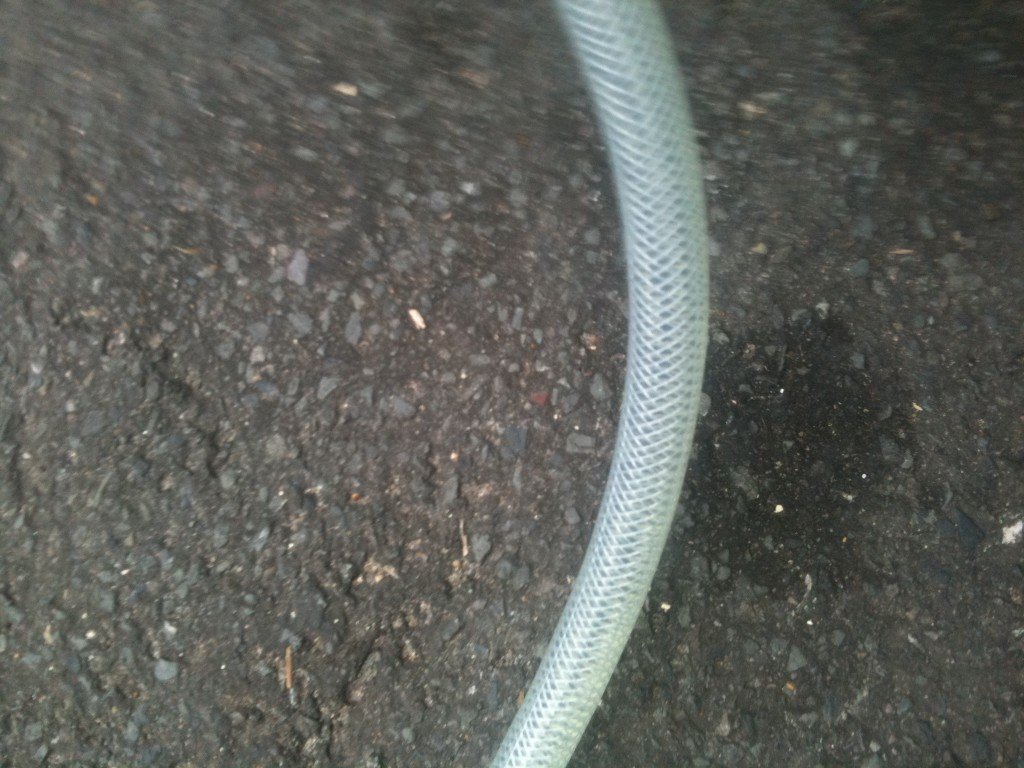 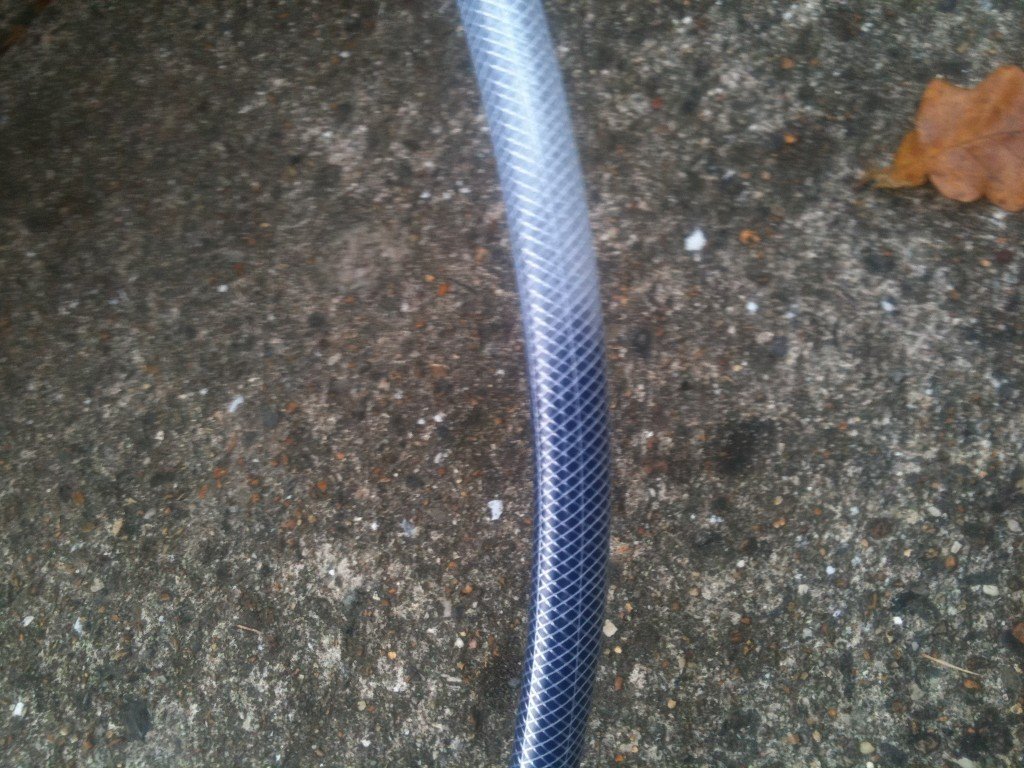 This is a picture of the same hose, the car was a Diesel VW Polo, it has been fill’d with 90% petrol, and 10% diesel, the car had been left overnight after loosing power and being towed back to the customers house, the suction line was attached to the high pressure pump inlet, as you can see the fuel has gone black, this is becuase the petrol has desolved  rubber in the fuel lines,  this car sat for a day with a very strong mix of petrol, it had also been driven until failure, the dark colour is a mix of rubber and plastic that has dissolved in petrol (fuel hoses are made type specific to reduce costs for car manufacturers,i,e diesel for diesel hoses only and petrol in petrol hoses only), I would not expect this to have done the car any real harm over an 18 hour period, just a microscopic layer of fuel line has been stripped off from the inside, these lines are fairly thick so a short bit of contamination once is fine, if you do want to make a habit of misfuelling regularly and leaving the car sitting for days with the wrong fuel in it you will eventually need new fuel lines. and plastic fuel components

Q; What happens to the fuel once we take it out
Answer; at the end of the day (or during a very busy day), I unload all of my mixed fuel into 220 litres drums, at our garage, (a licence is required to store mixed fuel from the enviroment agency), the mix is collected every 7 to 10 days by a garage services company, these are the same guys who take away used engine oil, brake fluid etc.. from garages everywhere. the mixed fuel is batched seperetly and in-between me and all the other companys that offer this service, I would guess that there is between 50 to 200 thousand litres a week of mixed fuel “made” in the UK per week. – once it is batched up into viable quantities usually 28.000 litres (tanker load) it is refined in one of the main refinery’s using a distillation process – identical to the one used for making crude oil, the petrol diesel mix seperates at 60 – celsius, i,e the petrol fumes off, it is then condensed and seperated, from what I have heard this is done twice to get a proper result, I would assume that the mix would then go back into the supply chain and be used as it was originally intended!
Q; I put the wrong fuel in - have I damaged my car?
Answer; it is very unlikely that you have, pretty much 1 for 1 call outs I attend are back up and running again when drained, if you have not started your car, you will not have damaged it. if you have driven your car and it stalled, or would not re-start then the chances of any lasting damage are very slim, there’s a bit of a safety mechanism that works by defualt and it goes like “petrol will ruin your diesel car but your diesel car will not run on petrol long enough to get ruined, therefore, PETROL WILL NOT RUIN YOUR  DIESEL CAR”
Q; My car conked out, have I wrecked it?
AnswerNo, as above “conking out” is your engines way of saying “I am not moving untill you get the wrong fuel out of me and the right fuel in”, I attend many “conk outs” “died” “made horrible noises” etc.. once they have been drained down , 20 litres of correct fuel put in -and the system fully purged upto the high pressure pump fuel inlet –  then , they all ran fine afterwards
Q; My car has a common rail pump, are you sure its going to be fine?
Answer; YES!, the vast majority of new diesel cars have sophisticated common rail pumps, we attend them day in, day out what I have written above applies specifically to common rails.
Q; Whats worse, diesel in petrol, or petrol in diesel?
Answer; the wrong fuel in varying quantities does different things, petrol in diesel will stall it, or depending on the mixture it might just still run, albeit sounding like a bag of spanners, – with reduced power  Diesel in a petrol car will make it lose power, and run flat. The worst case scenarios (and these are the WORST) are;

1) petrol in a diesel pump will eventually damage the pump (If you are unlucky enough to get a mix that just runs) , if you have not noticed it, and are completely oblivious to the car’s behaviour, you would also have to do a fair ammount of driving with a heavy foot, this would require a new common rail pump, piezo injectors and fuel lines,  the high pressure fuel pump which operates at 28 oddd thousand PSI of pressure and is a highley enginerd unit relies on diesel going thru it to provide lubrication, petrol does not lubricate, in fact it has “anti lubricating” properties, hence why petrol is good for cleaning out oil stains. what happens is the inner working of the high pressure pump start chaffing metal grinds on metal, this destroys the pump, then the metal chafe gets drawn thru to the piezo injectors and ruins them as well, now  before you go and sell a kidney to pay for a new diesel pump and injectors, please read the read the rest of these FAQ’s because full scale damage like this is very very rare.

2) diesel in petrol worst case scenario, the diesel will enter the cylinder and not burn, it will slide past the piston rings, into the oil sump and therefore the cars oil system, this will increase the oil level, to a point that could cause total engine failure, i.e mangled rods, bent pistons, complete block failure, or the thining of the oil can reduce lubrication to the engine and it could suffer from a full seizure/big end failure/ruined propshaft. Again this would not be an easy thing to do, the car would be very low on power and not running right, you would have to do a good bit of driving in it to achieve the above.

when you drive a car your fuel sloshes around the tank, (even with baffles)  when it gets low and sloshes too much it draws air into the fuel system, this is what running out of fuel feels like, however the tank is not totally empty at this point, it merely cannot supply a constant flow of fuel without interruption,  but there is still around 5 to 10 litres in the tank, this changes the sums when you are calculating the “purity” of the mixed fuel, and you will actually have a fair bit more diesel in the mix than you thought you had, allot of people tell me that the “gauge said 3 miles left” and when Í’ve finished the drain and they fill back up they find they got 20 quid more in it that they ever had, and are genuinely surprises how big the tank actually is,  that said, if you really feel attached to it and have suitable containers and somewhere safe to store it, then I might just let you keep it, I will expect coffee, biscuits and perhaps a sandwich or two for the privilege.

A very good article on this subject was written by auto express, here is the link here

This was re-hashed by the daily mail here