Question: I know it’s a bad thing to do – but, in reality, what happens if I put the wrong fuel in my car?

Answer: Well, I hope you have some time to kill while I explain the details of the incorrect fuel. Firstly, let’s break it down by fuel-type.

Understanding the differences between petrol and diesel will help to explain thewrong fuel problems arising when mixing them:

Petrol: any one of various volatile flammable liquid mixtures of hydrocarbons, mainly hexane, heptane, and octane, obtained from petroleum and used as a solvent and a fuel for internal-combustion engines.

Diesel Fuel: a fuel oil obtained from petroleum distillation that is used in diesel engines.

It has a relatively low ignition temperature (540°C) and is ignited by the heat of compression. Also called “derv” or “petrodiesel”. (Ref: Collins English Dictionary)

To take from these definitions is that petrol is a volatile solvent – and diesel is an oil with a low ignition temperature.

Due to these major differences we can correctly assume that they burn very differently inside a modern internal-combustion engine (a fancy way of saying a car engine).

“Both diesel engines and gasoline engines covert fuel into energy through a series of small explosions or combustions. The major difference between diesel and gasoline is the way these explosions happen.

In a gasoline engine, fuel is mixed with air, compressed by pistons and ignited by sparks from spark plugs.

In a diesel engine, however, the air is compressed first, and then the fuel is injected. Because air heats up when it’s compressed, the fuel ignites.” (Ref: howstuffworks.com)

So, if we mix petrol and diesel what do we get?

Well, without getting technical, we basically get a liquid which is not as volatile as pure petrol, neither is it as “oily” as pure diesel.

It also has a completely different octane rating (octane rating is basically a measure of how much the fuel can be compressed. Before it spontaneously ignites). This means that the fuel will ignite at a different point in the combustion cycle than if it were a pure fuel.

How does this affect the individual engines? 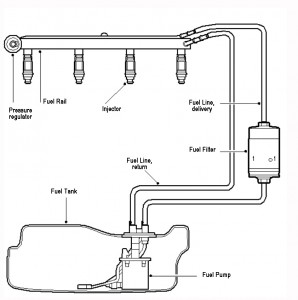 Adding diesel oil into petrol and trying to use it to fuel a petrol engine – The octane rating of the petrol will be reduced.

This can cause premature ignition of the fuel, resulting in engine “knocking” and/or “pre-ignition”.

Effects of engine knocking range from inconsequential to completely destructive. Pre-ignition can result in burnt or melted pistons.

Due to improper and inefficient combustion we often find that the fuel is not completely burnt leading to increased emissions and oil build-up on engine components.

(you’ll often find that the spark-plugs will get coated in a film of oil which will reduce their ability to spark correctly).

Exhaust sensors can also become covered in this oil. This will cause them to malfunction or even burn out completely. 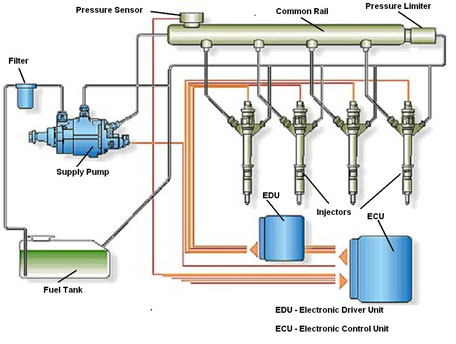 Adding petrol into diesel and trying to use it in a diesel engine – The octane rating of the diesel will be increased.

This will also affect the point at which the fuel ignites in the ignition process, resulting in partial burn, increased emissions and an increased risk to sensors.

However, in addition to changing the combustion properties of the fuel, petrol will also affect the viscosity of the diesel.

Due to the fact that petrol is a solvent it can dissolve the diesel, which makes the diesel fuel less oily.

This is more serious in a diesel engine than petrol. The reason for this that diesel fuel also acts as a lubricant for the diesel fuel system.

Basically, both the fuel tank lift-pump and the common rail high-pressure pump used in a diesel engine. Rely on the oiliness of the diesel to keep them properly lubricated and functioning.

If you remove or reduce this lubrication the pumps will start to wear and will eventually fail.

This could also have an expensive add-on effect: small metal particles worn away from the pumps (due to reduced lubrication). Can travel down the fuel lines and become lodged in the injectors, clogging them up.

On the Brighter Side:

All of the above provide very depressing reading you happen to have put the wrong fuel in your car.

However it’s not all doom and gloom – there is a brighter side: It is very rare to see an engine get to the point of damage mentioned above.

Modern engines are controlled by very sophisticated and sensitive computers in the ECU.

If you have the wrong fuel going through your fuel system the ECU will very quickly pick up that something is wrong and will, more often than not.

Shut down the system to prevent any damage (they either do this actively by putting the engine into limp mode, or passively by changing the system settings.

Based on the incorrect data acquired from affected sensors – which cause the engine to fail to run at all).

My point here is that most engines will not allow you to do massive damage to them from using the incorrect fuel-type.

The most common reason that people have damaged their vehicles with the wrong fuel is because they either ignored or failed to notice.

The clear indications that something was wrong, and continued to drive the car long after it was evident that they shouldn’t.

So, this brings us to a very important question:

Question: How can I tell if I have put the wrong fuel in my car? What are the most common wrong fuel symptoms?

Answer: Assume you’ve just been to the petrol station to fill up and, as you’re driving away, something starts nagging at you and you begin to wonder if you might have put the wrong fuel in.

Well, there are some pretty obvious signs that something could be wrong with the fuel.

These signs or symptoms include (but are not limited to):

Loss of engine power: either the engine going into limp mode, or just lacking revs.

Increased emissions: basically a lot of black or white smoke coming from the exhaust.

Engine coughing or spluttering: very easy to notice as the car will “kangaroo” while driving.

Difficulty starting: especially once the engine has had a chance to cool down.

So What Happens if I put the Wrong Fuel in my Car?

Any one of these manifestations could be an indicator of “wrong fuel”. But bear in mind that there can also be other causes of these problems. So the next thing to do is to actually check the fuel.

There are a number of ways to go about this:

Having said all of the above there are a multitude of other factors that can and do affect how wrong fuel mix-ups affect vehicles.

These factors include the ratio of the two fuels (contamination percentage), age of vehicle (amount of wear and tear already extant on the fuel system), type of engine.

Quality of the individual fuels as well as the engine fuel system components, etc.

With all the variables in the mix, driving a car on the “wrong fuel” is a gamble – with ever increasing odds against as the contamination percentage goes higher. In fact the odds are so heavily stacked against it working out ok that the majority of modern dealerships.

will no longer guarantee their parts if they have come into contact with the wrong fuel. Yes – that means that taking a misfuelled vehicle back to most dealers will result in a bill for an entirely new fuel system.

I’ve seen Mercedes and Land Rover / Range Rover bills in excess of £15,000 just because of 10 litres of the wrong fuel.

Of course this is totally over the top and unnecessary. As I explained earlier, it is very rare to find a vehicle that has actually been damaged because of the wrong fuel.

But dealerships do not take the chance and simply replace everything – whether it’s needed or not.

So, if after all this you discover that you have put the wrong fuel in your car, give us a call for wrong fuel drain services. We know what we are talking about, and we’re happy to help.

If you need more help in What Happens if I put the Wrong Fuel in my Car?

Just give us a call and we will help you out!

2 thoughts on “What Happens if I put the Wrong Fuel in my Car?”