Skip to content
After the initial shock and panic of realising that you require a fuel draining following the misfuelling of your vehicle has sunk in, the main question on your mind is most likely to be: how much is going to cost to draing the to drain the wrong fuel in car cost?
This is the case for over 150,000 people in the UK every year who put the wrong fuel in car, that’s one every four minutes!
The most important thing to do is to not start the car if you are still at the station to lessen the risk of contamination.
The misfuelling cost of a fuel drain from an independent reputable fuel draining company can vary from anywhere between £180 to £250. The price depends on a variety of factors such as:

For Fuel Fixer, no matter if it is day or night, unsocial hours, weekends, public holidays etc, our prices are always consistent and are not subject to fluctuations. We are able to dispatch an expert to assist you 24 hours a day 7 days a week.

The AA does do fuel drains and have their own fleet of mobile fuel draining vans, however, they still charge their members about £230 and due to the size of the company, they are often very busy thus resulting in long waiting times (we have heard up to 8 hours before they even arrive).

The RAC also has a few fuel draining vans however they are scarce in the South East, therefore they sub contract most of their jobs to garages and other fuel draining companies of which you will not know the quality of reputation of said company.
Dealerships and garages:
Some dealerships will charge anywhere between £400 and £800 for a drain that does not involve dismantling of the fuel tank however some dealerships will charge anywhere between £4,000 to £9,000+ for a major fuel system and engine rebuilding which is not necessary when we can do the drain and flush at roadside.
Your friendly local garage will often charge a similar price to a fuel draining company should they have the relevant equipment to complete the job adequately.

With both dealerships and garages you will have to get the car to them which further increases the bill and will leave you for a day or two without a car.Mobile fuel draining companies are not only specialists in misfuelling (whether it be petrol in a diesel car or diesel in a petrol car), we are also able to sort the problem quicker and cheaper. 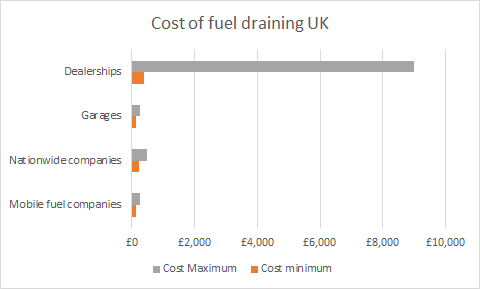 14 thoughts on “How much does a fuel drain cost”