I see this sort of thing all the time, occasionally I take pictures, have a look at this below. 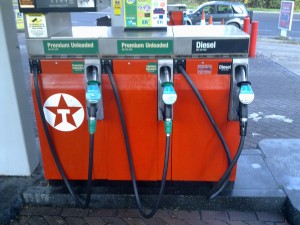 look closely, and compare both pictures, unless you had misfueld at this pump you probably wouldnt have noticed what my last customer had. so lets begin.

just another pump island… now look at this one

these are 2 islands in the same station, right next to each other, my customer was filling at one of them, his van was tight against the pump and he couldnt see his own pump island very well, so he looked at the one that was next to him and “drew his pistol” , this is where it went wrong.

on the top island, both petrol pumps have green hose endings on the nozzles, the diesel pump has a black hose end

The high octane pumps colour flash, is grey, but it could also be faded black.

I took these pictures to send to the employer of the man who called me, he worked for a small transport company and was driving a brand new van (less than 1200 miles),  that was the new pride of the fleet, he was genuinely worried that he might be laid off for what he had done, and opted to pay for it out of his own pocket to appease his transport manager, needless to say the wrong fuel was taken out and the fuel drainage was complete in 30 mins and he was on his way, I e-mailed these pictures to his transport manager and also pointed it out to the station owner.

The adverts on nozzles are a whole subject unto themselves, volkswagon ran a campaign recently on petrol pumps and in the text of the ad it said “diesel” this was on petrol pumps!

to prevent misfuelling; you cannot rely on old rules of thumb with hose colours, pump placements or even nozzle colours, now that every pump has an advert on it and every petrol station has branded fuel (excellium/premium/momentum etc)  you have to be very carefull, it might seem a tad twee but if you follow these simple instructions, you should never suffer from misfuelling, if you need a fuel drain contact us

2) look at all the nozzles and find the one that read “Diesel”, – or petrol if your driving petrol

3) check to see that THE SPOUT END OF THE DIESEL PISTOL HOSE IS LARGER THAN THE SPOUT ENDS OF THE PETROL PETROL PISTOL. THIS IS THE ONLY FAILSAFE method, or if you are driving a petrol make sure it is smaller than the diesel.

4) if you do this, you will never misfuel, and if you do it will only be because some joker has changed the actual pump handles over.

if you have put the wrong fuel in your car and need a fuel drain becuase you have unleaded in your diesel car or petrol in your diesel tank, then feel free to call us, we are here 24 hours a day 7 days a week on 07514409700

One thought on “Misfueling Excuses”